I plan to dive into wrist injuries, but with no shortage of options, I’ve decided to give the choice to you.  The option that gets the most votes will appear early this week!

The wrist is a complex joint that connects the radius and ulna (the 2 bones in the forearm) to the carpals in the hand.  In most textbooks you’ll find that wrist’s purpose is stated as follows: “The wrist (and hand) allow for the manipulation of objects in space and provide us with the dexterity required for fine motor skills.” While that is the case for most people’s requirements of their wrists, gymnasts often use this joint as a weight bearing structure, and as such, injury is common.

Osteology of the Wrist:

The wrist is the junction of the distal end of the radius and the carpal bones.  It is often compared to the ankle joint(s) in structure, however through evolution, the wrist has become more delicate and lost many of the characteristics that would allow it to be a truly effective “weight-bearing’ joint.  The bones are smaller, there is less cartilage, and the ligaments are thinner – a  trifecta of risk for injury and instability. 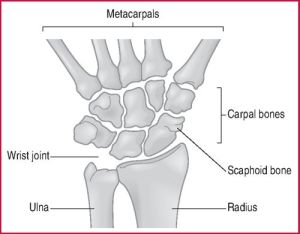 The eight carpal bones can be divided into two rows of four bones.  The proximal (or closer) row is composed of: (running from thumb to pinky) the scaphoid bone, the lunate bone, the triquetrial bone, and the pisiform bone.  The distal (or farther) row is composed of: the trapezium bone, the trapezoid bone, the capitate bone, and the hamate bone.  Why are the names important? They’re not (unless you’re heading into the medical field) – but it helps to know so that I can tell you that the scaphoid is the most commonly fractured as its location makes it more susceptible to weight and force.

Palmar view of the carpal bones

Though there is no direct connection between the carpals and the ulna, there is a cartilaginous disc (shown in the picture below) that acts to allow increased congruence between the ulna and the carpal, as well as maintain the space on the ulnar side of the joint.  This disc is known as the Triangular Fibrocartilage Complex (or TFCC) and is commonly injured in weight bearing activities. 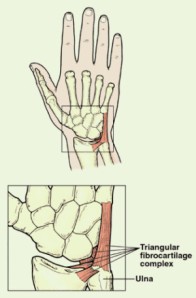 One reason that the wrist is so complicated is because every small bone forms a joint with the bone next to it (aka “Intercarpal Joints”).  This means that technically, there are “dozens” of small joints in the wrist that assist in allowing such versatility of movement.  Articular cartilage covers the ends of each of the bones where they meet in a joint, thus improving glide and protecting joint integrity.  For our purposes, we need only look at “three” functional joints in the wrist:

The Ligaments of the Wrist:

In the wrist, the ligaments are the passive supports that ensure that the structure of the joint is maintained.  There are many ligaments in the wrist joint, and rather than name them all, we can group them into two categories:

Muscles of the Wrist:

Similar to the muscles that control the movement of ankle, the wrist and hand muscles are located primarily in the forearm.  Often they work in groups (aka synergistically) to allow for the dexterity and movement of these joints.

The tendons of these muscles are longer from the end of the muscle belly to the insertion, and thus require two thick bands at the wrist to anchor them in place:

Alright, on to the muscles…In order to simplify a rather massive amount of information, I’ve divided these muscles into the action they perform.