Osteology of the Ankle:

Traditionally, most anatomy textbooks will argue that the connection of the tibia, fibula, and the talus is the “true” ankle joint.  When considering the ankle relative to gymnastics, it can be argued that the ankle joint is composed of three separate articulations.  This is due to the complex motion required of the ankle with the sport (rarely is the motion just one dimensional).  These three articulations (joints) are: 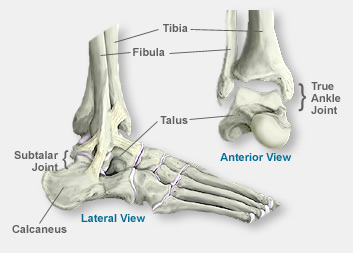 Ligaments of the Ankle:

There are six major ligaments in the ankle.  Five are along the lateral (or outside) of the ankle and one is on the medial (or inside).

Lateral view of the ankle ligaments

The posterior inferior tibiofemoral ligament and the anterior inferior tibiofemoral ligament stabilize the distal tibiofemoral joint.  These are important in gymnastics as they can be weakened by landing “short” on a backward tumbling element repeatedly. When this happens, the talus is jammed up into the space between the tibia and fibula and over time this mortice becomes more flexible.  With this, the talus can move beyond the normal range.  This leads to an unstable talocrural joint and can cause the talus to “sublux” or get stuck out of place.  In this case, the gymnast will complain of anterior ankle pain with flexing the ankle/foot or when squatting and may have a noticeable loss of dorsiflexion.  It also predisposes a gymnast to ankle sprains and can lead to an earlier onset of arthritis in the joint.

The ligaments along the medial side of the ankle are more numerous and thicker (making them stronger than the lateral ligaments).  They share common origins and insertions and are collectively known as the deltoid ligament.  This ligament prevents eversion and is traditionally only injured in the most severe of ankle injuries (dislocations, fractures with dislocation).

Muscles of the Ankle:

There are many muscles that contribute to the mobility and stability of the ankle.  In gymnastics, several play a more key role.  They are listed below by the motion they perform:

These muscles all sit in the lower leg and cross at the ankle.  Their tendons are longer and are covered in tendon sheaths that protect and lubricate them as the run along the medial and lateral malleolus of the ankle.

3 thoughts on “Anatomy of the Ankle”